Olive
March 2015 (estimated) - 11 October 2017
She was a bundle of energy that loved nothing more than sprinting around the cage and investigating what others were doing. She had no concept of personal space and regularly climbed into occupied houses for a snooze. She was a very affectionate guinea pig that loved cuddles and who would follow you around demanding attention.
Kepler (Keppie)
January 2014 (estimated) - 28 March 2019
He was a very sweet boy who loved hanging out with his girlfriends. He was particularly close to Ella, and helped her immensely with her anxiety. He had an unhealthy obsession with carrots, hoarding them and throwing tantrums when they ran out. He was a natural in front of the camera, and galloped around the cage whenever he heard his name.
Mireya
19 March 2016 - 19 April 2019
She was a very charismatic little lady, usually choosing to bounce to her destination. She loved to popcorn and zoom around. She had a lot of sass, especially when her eyebrows had grown out. She was curious and would investigate anything and everything, often sitting the human's feet when they tried to clean.

​I moved and rearranged the enclosure to span the wall, creating a two-storey 2x10 C&C cage. The top storey was split in two with dividing grids. Keppie and Latté shared one side and Cinnamon and Ella the other; Renée, Vera, Tango, and Mireya occupied the bottom. Puffie stayed in the floor cage on the other side of the room.
​Eventually I successfully joined Cinnamon and Ella with the quadro group. The six girls - Cinnamon, Ella, Tango, Renée, Mireya, and Vera - then lived in the bottom storey while Latté and Keppie remained up the top in one section and Puffie in the other.
The guinea pigs got their own room at the new house. I built a cage from corflute that encompassed a 50 sq ft fleece area, a 15 sq ft hay area, and a two-seater couch. I used large incontinence pads as bedding. They got off to a rocky start but I let them sort out their dominance issues without intervention. After about three days they settled down and my beautiful herd of twelve guinea pigs was living together harmoniously. It was at this point I dubbed it Wheektown. 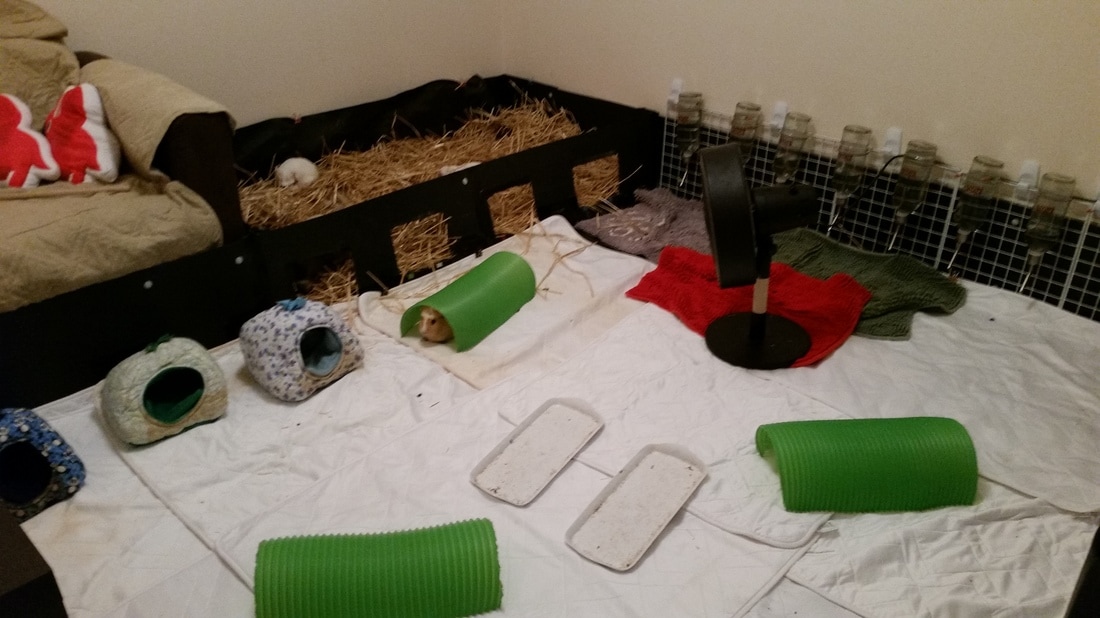 Halfway through the year I rebuilt the cage. I made it a bit smaller, but it was easier to maintain and I was able to access the cupboard without walking through the cage. It was about 49 sq ft, including the hay loft. Due to the square shape I could use a fleece blanket for bedding, and the shelter floor was completely heated. 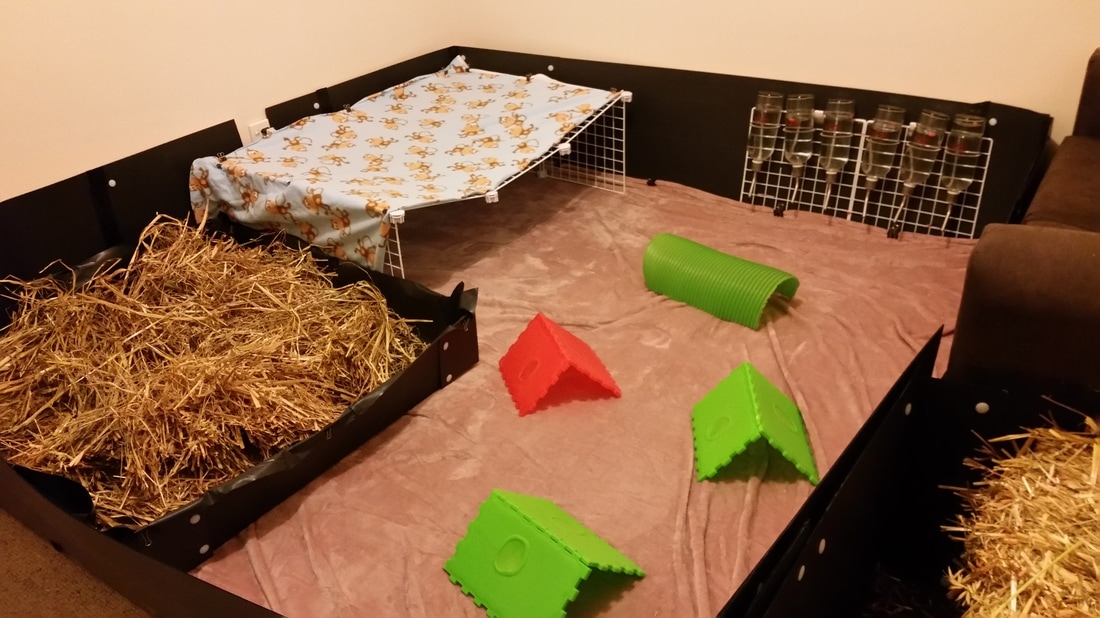 After I began taking in rescues and boarders, I cleared out the spare room and turned it into a second guinea pig room. I used the two 2x6s from the cage at the old house for the rescue or boarding guinea pigs. These cages had Piggy Bedspreads as their special fleece bedding. However, when pushed together there was another 6x3 space that I could utilise if I needed more room. In this case I used the incontinence pads, the fleece blankets, and the grids to create makeshift cages.